One of the projects our team at Genie is most excited about is Genie Builder, our no-code UI plugin for VSCode. With it, you can create a UI for your Julia apps without writing a single line of HTML or Javascript. All you have to do is drag and drop the UI components and connect them to the variables in the backend code. Pretty amazing, right?

To get the new version, simply update Genie Builder in VSCode.

Genie Builder streamlines the app development by splitting the implementation into 3 simple steps:

1) Write the data analysis code as you would usually do, no need to worry about UI stuff!

2) Design the UI with Genie Builder's no-code editor in a matter of minutes.

3) Link your Julia code to the UI by exposing variables with the @in and out macros, selecting the data bindings in the no-code editor, and adding reactive code in the @onchangeany macro. 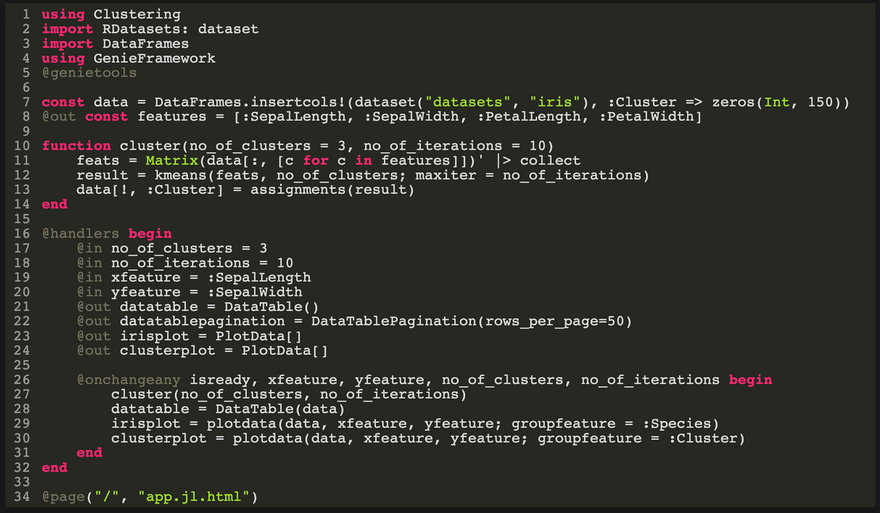 Check out the video below for a step-by-step tutorial in which we build the Iris Clustering demo app using Genie Builder v0.2.

If you need support or have feedback and suggestions, make sure to join our Discord. See you there!

Handling Strings and GadFly-Plotting while Learning about Zipf's Law

My experience working as a Technical Writer with FluxML - Part 1

My experience working as a Technical Writer with FluxML - Part 2

Once suspended, pgimenez will not be able to comment or publish posts until their suspension is removed.

Once unsuspended, pgimenez will be able to comment and publish posts again.

Once unpublished, all posts by pgimenez will become hidden and only accessible to themselves.

If pgimenez is not suspended, they can still re-publish their posts from their dashboard.

Once unpublished, this post will become invisible to the public and only accessible to Pere Giménez.

Thanks for keeping Julia Community 🟣 safe. Here is what you can do to flag pgimenez:

Unflagging pgimenez will restore default visibility to their posts.