Eh, still think that "State of Kaggle" is a better title

conduct an industry-wide survey that presents a truly comprehensive view of the state of data science and machine learning.

More likely, its representative of active Kaggle members with the time and inclination to fill out a fairly long survey. Still I think it would be fun to explore this data and see how the Kaggle community shapes up. Plus, Kaggle (still) does not support Julia in its kernels so maybe this post with push them down that path. It certainly won't but one can hope.
The survey consisted of 43 questions containing both multiple choice question with only one selection allowed and multiple selection questions. It generated almost 24,000 responses, with each line representing the choices of an individual respondent. The dataset is available under a Creative Commons licence here.

I am going to use the DataFrames.jl and Gadfly.jl libraries for most of the analysis and plots in this plot. Would have used Makie.jl but my laptop has a love-hate relationship with Makie. Also, Gadfly's defaults look prettier. Let's bring in those and read in the dataset as a dataframe:

Let's quickly gain some idea of the shape and composition of the dataset.

Interesting the dataset has 296 columns for 47 responses. The survey details say that , Responses to multiple selection questions
(multiple choices can be selected) were split into multiple columns (with one column per answer choice). Likely this is what caused those extra columns to appear in the dataset:

We will first look at the number of survey responsdents per country. I think I know which country will finish at top, but we'll see. 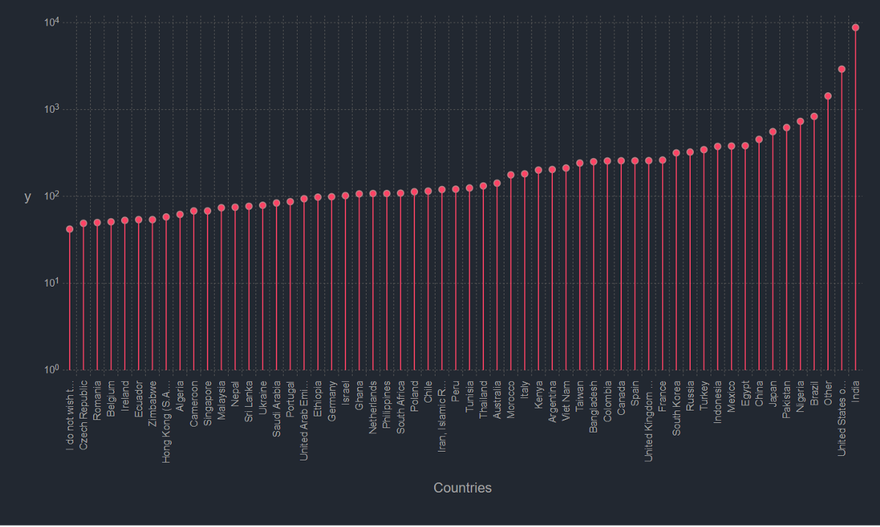 As expected India is at the very top

Next let's check out the distribution of age of the survey respondents.

As you would expect the bulk of the respondents, almost 60% infact, are between 18–30s. Not particularly surprising given the respondents would be mostly Kaggle users themselves, though I suspect there's some disconnect here between the survey and actual industry trends. This is of course, just baseless speculation, so don't take it too seriously.
Let's just quickly split the same information by gender to see how it matches. 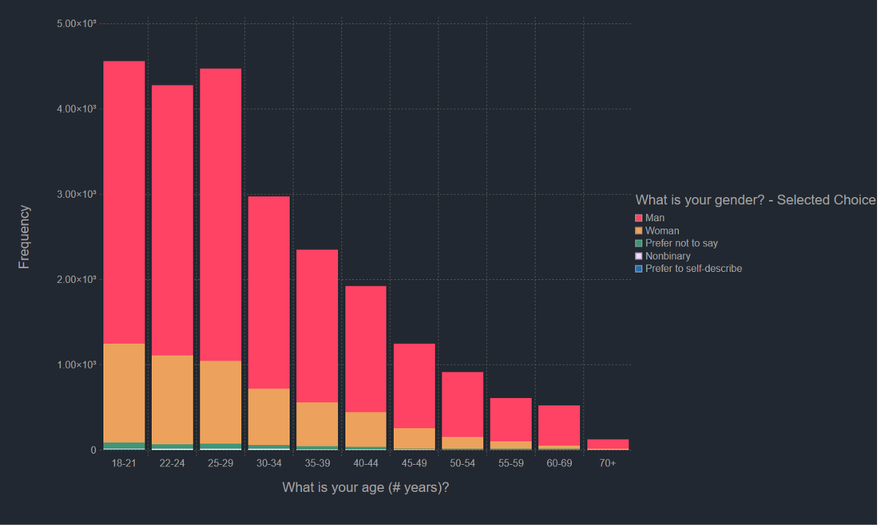 The trends in this graph accurately capture my own experience, i.e. my Data Science and AI teachers were overwhelmingly men, while my own colleagues and peers aren't. 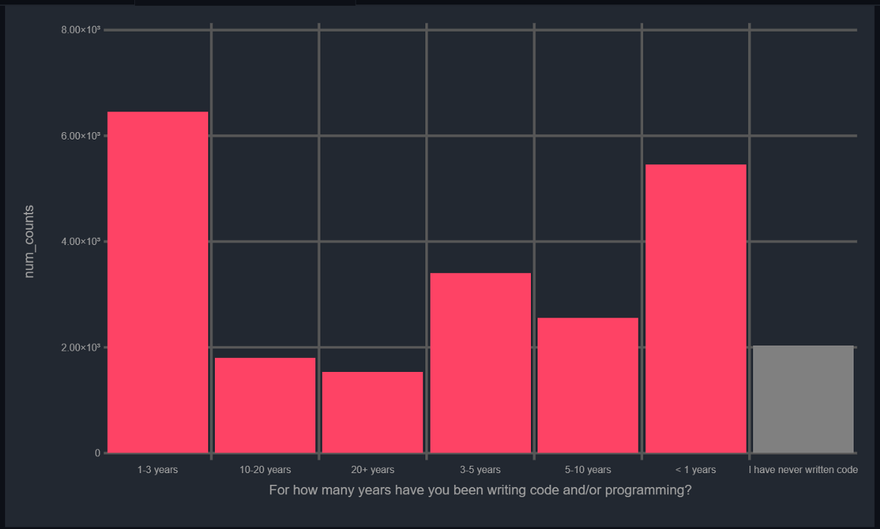 Pretty much as you would expect, data science is a fairly young field, Kaggle's audience even more so. Most of the respondents are between 0–5 years of experience in writing code. Now, let's talk about the money involved. This is actually really interesting. I am going to hypothesize that we'll find a clear divide between practioners in India and the USA, mostly due to dollar-to-rupee conversion rate.

We need some preprocessing so ensure that we can actually sort the incomes and ages. There's mulitple ways we could go about it, but my plan is to simply create a median value for both income and age columns.

Yes, I know, I know these functions don't build an actual median but its the intention which is the point.

I think a heatmap is a good choice here since we need to count a lot of categories. We can use the rectangular binning from Gafly, I think. 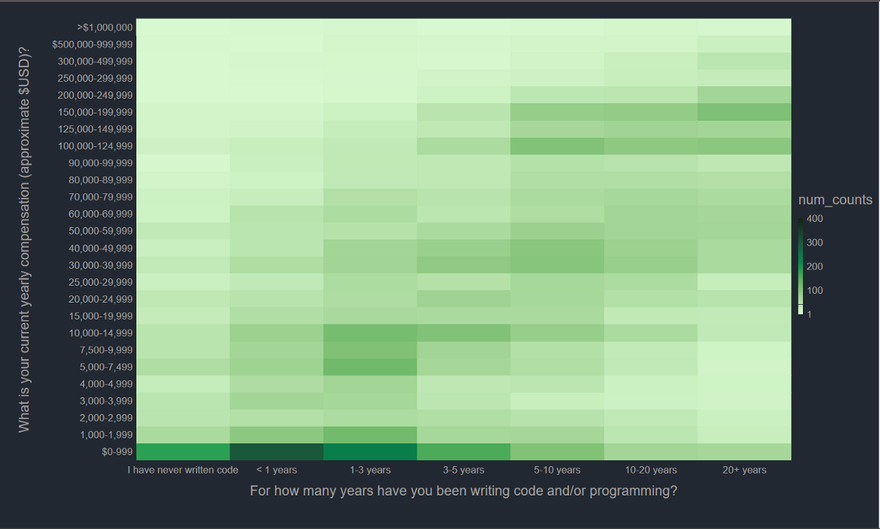 The graph is generally as you would expect, though the 0–999 is a bit too dark. Maybe the number of students in this particularly high, though that explanation still beggars belief. Let's see how the company size of the respondents affects the income level. 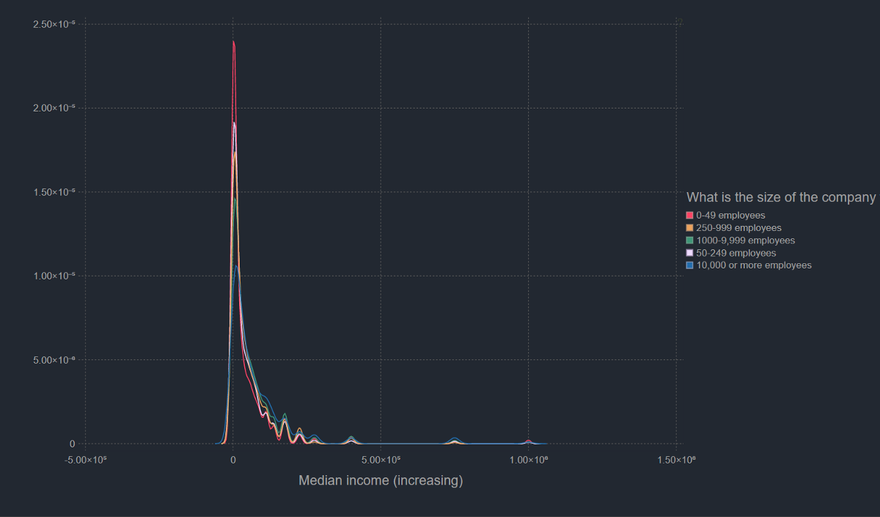 size of the company vs income


Nothing as such surpising here. The maximum number of respondents belong to 0–49 category and as you would expect aren't in the higher income brackets. They are essentially startups and most startups don't make too much money.

I think a question on income inequality is as good a place as any to end this post. I hope you enjoyed working though it and hopefully, be a bit more open to exploring Julia as an option in you own data science work. I should probably point out here that I am not a Julia expert, so likely most of this code can be optimized both, for speed and readability a lot more. If you have any ideas about it, do comment. Also if you wanna read a more prettier version of this blog post, check here.

If you want to chat with me you can reach here.

How to Conformalize a Deep Image Classifier

Once suspended, anupjoseph will not be able to comment or publish posts until their suspension is removed.

Once unsuspended, anupjoseph will be able to comment and publish posts again.

Once unpublished, all posts by anupjoseph will become hidden and only accessible to themselves.

If anupjoseph is not suspended, they can still re-publish their posts from their dashboard.

Once unpublished, this post will become invisible to the public and only accessible to AnupJoseph.

Thanks for keeping Julia Community 🟣 safe. Here is what you can do to flag anupjoseph:

Unflagging anupjoseph will restore default visibility to their posts.