Someone posted this in the Julia reddit page Pains of Julia compared to Python. In that article, he listed out 7 things he loved in Python but couldn't find in Julia. I found interest in number 7, because my first few weeks in Julia gave me same pain (which would later be the reason I loved the language more). It states, reading from the article:

I won't explain if Julia is OOP or not, but focus on the other part that has to do with remembering functions to work with in the datatype. Now, I'm sure a lot of user had same pain and I'd love to know how you conquered it. Meanwhile, let me share my own experience of how I solved the puzzle in a way that got me used to the langauge, where I don't need much googling, but rather explanations on specific implementations of some methods I might not understand, which the Julia community on slack and discourse are happy to help with.

Honestly, if you haven't been told yet, then hear it clearly now: Julia would be a bone in your throat if you hate using the REPL it provided. A bone in your throat, because you would know what to do a lot of the time, but don't know how to do it in Julia.

You can solve this using the steps I stated in the reddit answer I gave to the thread.

The mandatory step is to download Anaconda, VS Code and set it up for Jupyter Notebook and Julia. Just google the workarounds for setting this steps up and ask questions politely (in any one of Julia forums) if you're stuck, then in 1 hour you should be done.

Hopefully you're done with the steps above and now it's time to work into the magic that helped me get familiar with Julia and understand most of its methods. 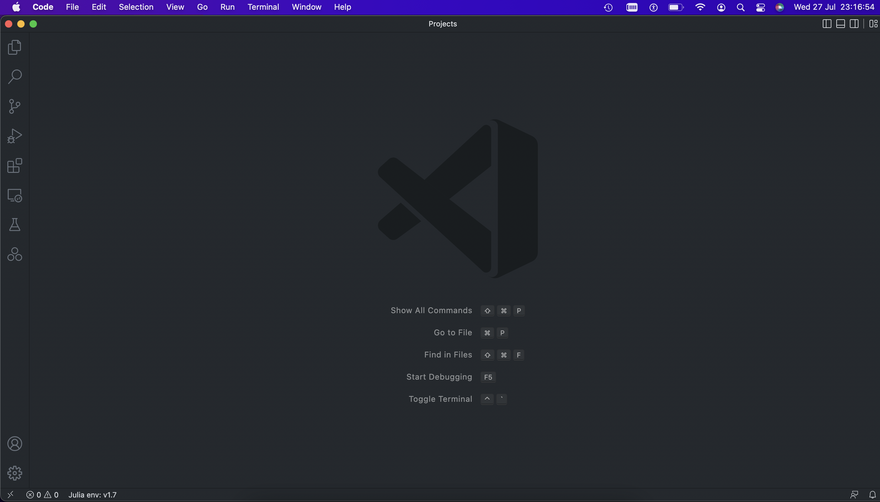 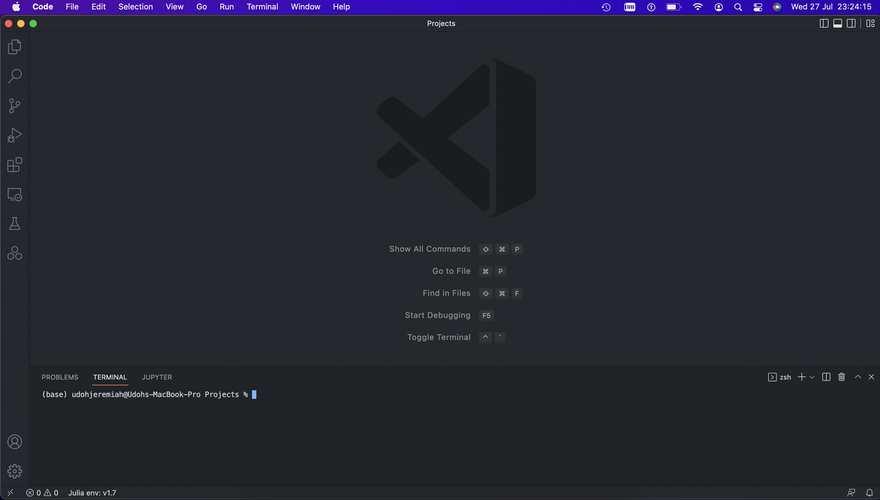 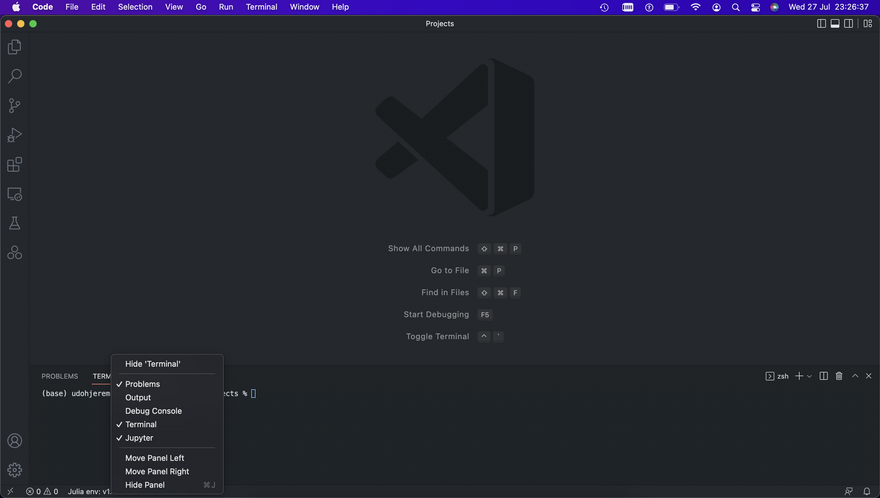 If you have done so, then you screen should now look this way. 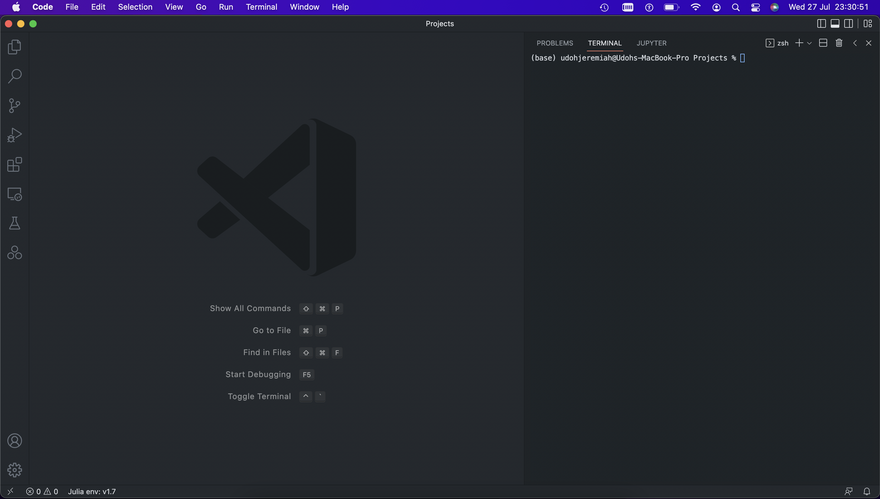 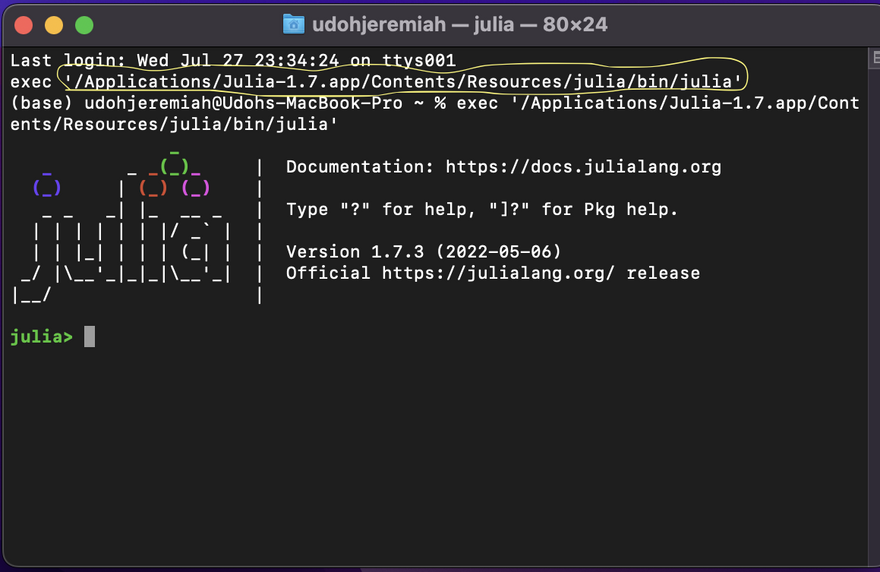 If you've done so then your VS Code terminal should look like the image below. 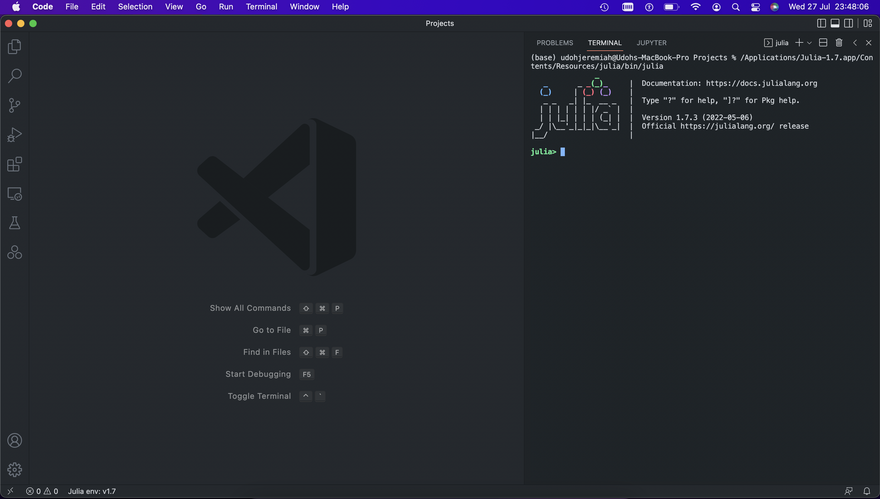 We all know how to set up the terminal for VS Code now and have it run our Julia REPL, making us have it all in one environment. 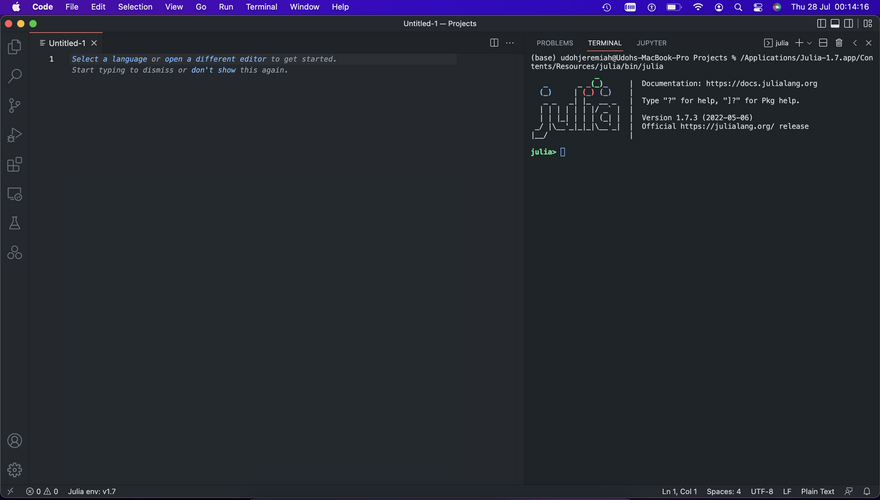 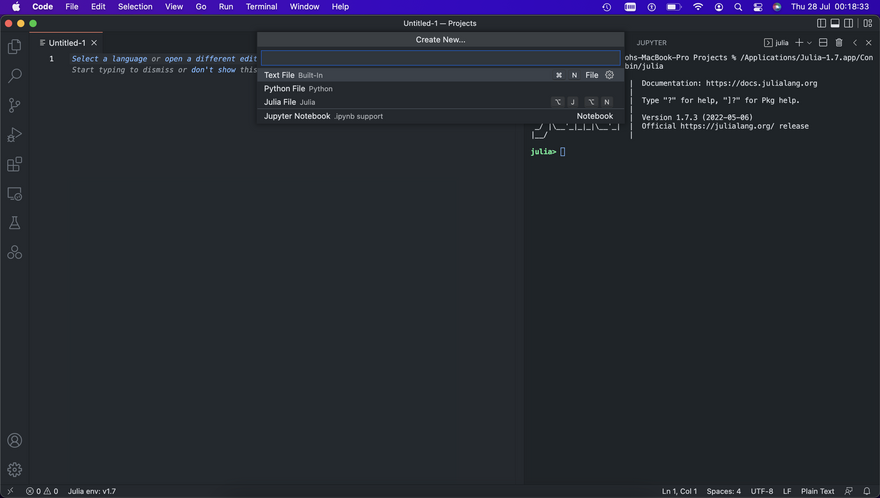 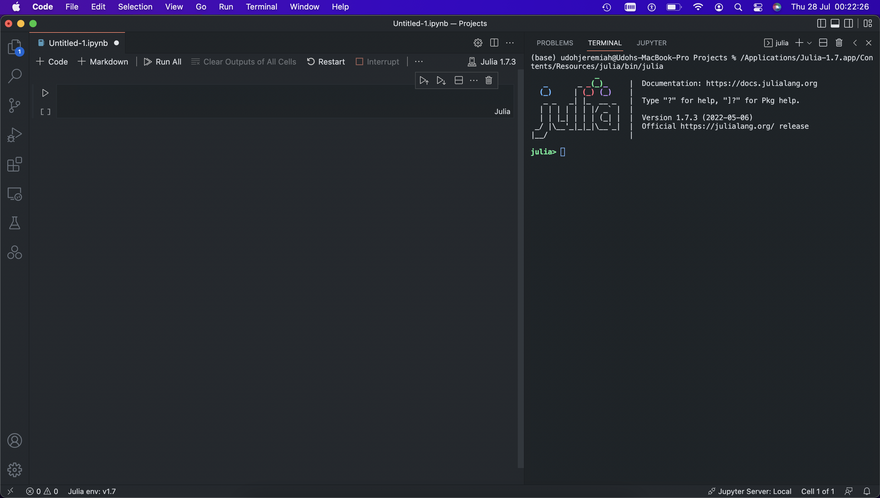 The names method used in the function defined above is used to get an array of the names exported by a Module, excluding deprecated names.

So we will pass those 3 modules of the standard libraries as arguments to our function we created. Type the code below into the next cell of your notebook. 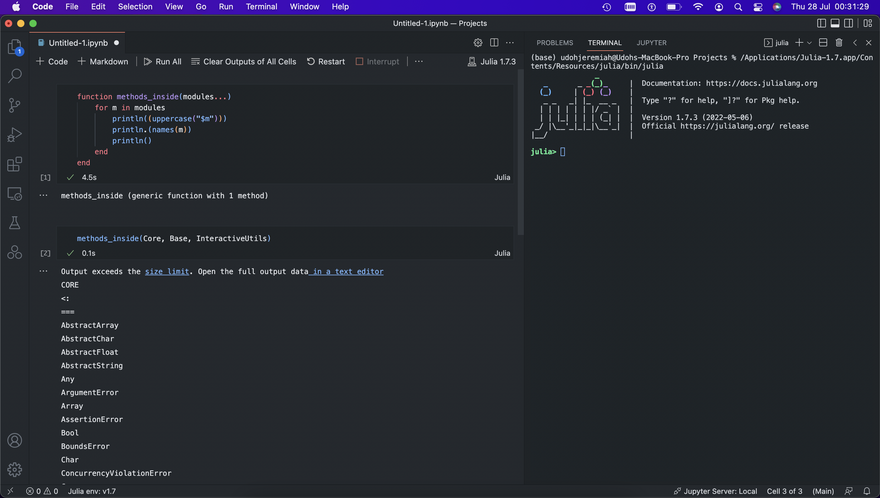 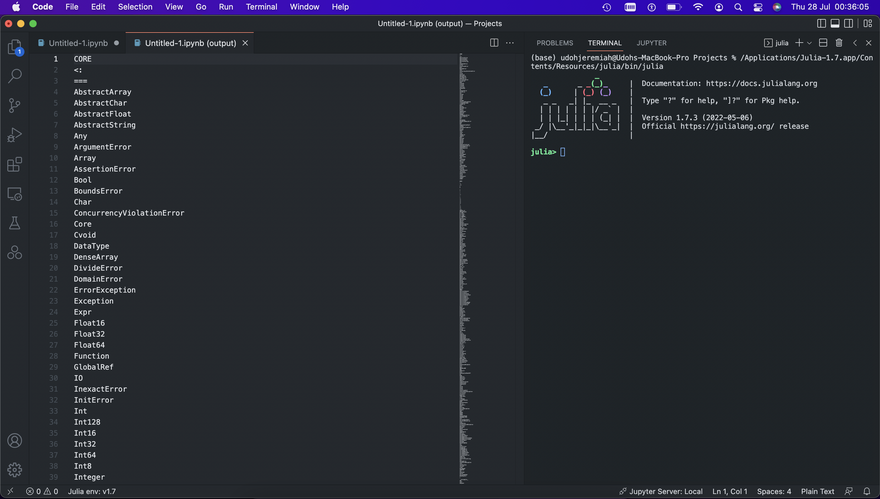 You now have all the methods in the standard libraries in a text editor. You can scroll down and then see the methods listed in Base module and InteractiveUtils as well. Your laser-like focus should be on the Base first and then work your way back to the Core and then the InteractiveUtils section of the methods (its not a rule, that's how I did mine and it worked for me, so change it to fit your needs).

The question next is: what do we do with this? Well the answer is what I did with it (as that is where my knowledge is limited to), as I can't tell you how you would use it. 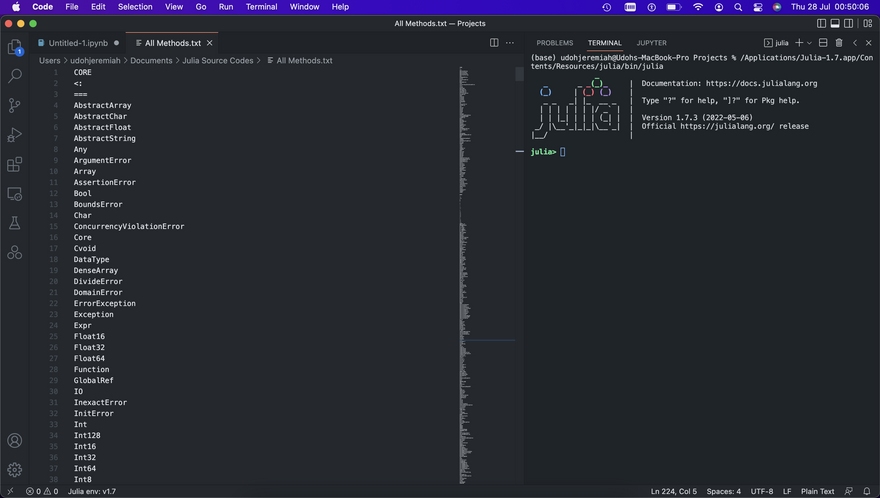 I saved mine with All Methods.txt. So each time I open up VS Code for working with Julia, I could easily lookup methods and then use the help?> entered by typing ? on the Julia REPL to quickly find out their meanings all in one environment.

I know this might sound stupid, but I usually do a very quick glance through the All Methods.txt file before writing my own methods for things, a lot of the time Julia has defined what I want executed. An example is checking if all the elements in an interable is distinct from each other. One would think a simple for...end loop is an easy way to solve this. Of course, it is, but glancing through the file, I see the allunique method, which sounds like what I want. Then I look up its documentation on the help session in the REPL and immediately I know its what I want. Would google had helped me? Probably yes/no, but whatever the answer may be, using this approach keeps making me familiar to the standard library of the language. 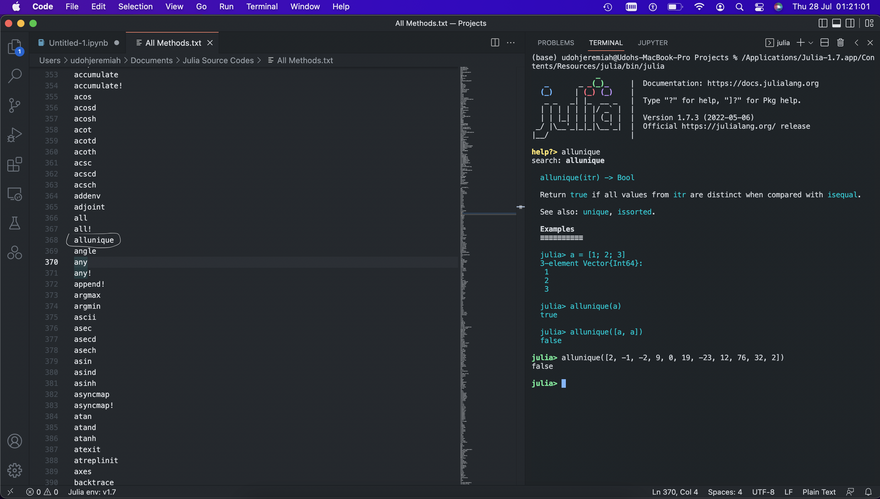 Another method is checking the perfect square less than or equal to a number. One would easily jump into coding, but trust me, as simple as this function sounds, Julia has provided it for you. 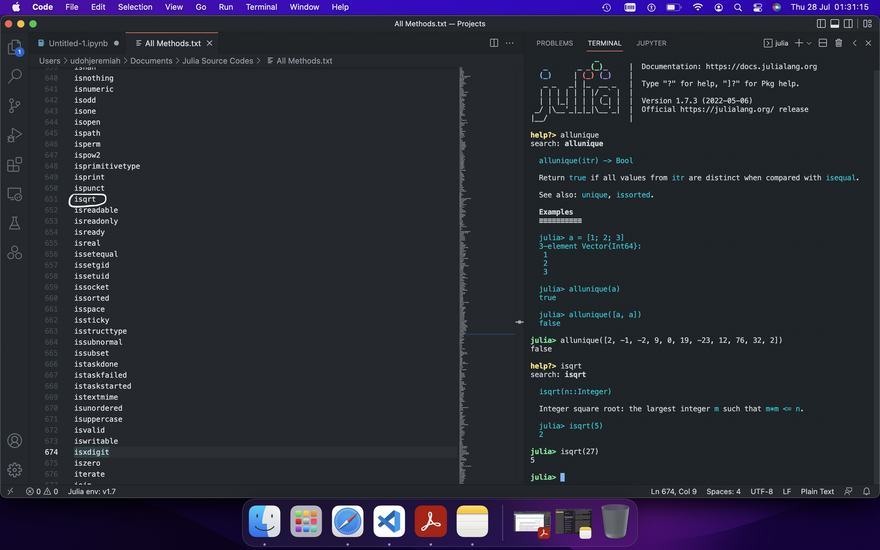 Using the built-in functions, means your code would be more Julian, making its intents readable among the Julia community and run faster as well. So please use it.

On my study and free-time as well, I also explore new methods. Julia is so new, so a lot of questions which can help reveal new methods or ways of doing things have not been asked yet on stackoverflow or whatever, so googling won't help now. Your best bet is to learn them yourself and write more syntactic Julian code thereby making your code more scientific and program run more faster.

How did you solve yours, I'd love to know?

Are you in the market for reliable wholesale fruit juice suppliers?

ndx
Happy to be an early-adopter of "The 21st Century Programming Language"
JuliaLang? Your complains have neat solutions. Where do we go next from here with programming languages?

Once suspended, ndx will not be able to comment or publish posts until their suspension is removed.

Once unsuspended, ndx will be able to comment and publish posts again.

Once unpublished, all posts by ndx will become hidden and only accessible to themselves.

If ndx is not suspended, they can still re-publish their posts from their dashboard.

Once unpublished, this post will become invisible to the public and only accessible to ndx.

Thanks for keeping Julia Community 🟣 safe. Here is what you can do to flag ndx:

Unflagging ndx will restore default visibility to their posts.