Last week I had to teach for my Computational Linguistics' class the Zipf's Law using Julia. This post includes the Julia code used for demonstrating the Zipf's Law.

I will not spend time on explaining here why this empirically-motivated law that characterizes natural languages holds. I will confine myself here to saying that some brilliant people before the American linguist George Kingsley Zipf spreads the word about its existence noticed a very interesting pattern:

The goal of this post, however, is to simply demonstrate the validity of the law by using the dataset of the Amazon Musical Instruments Reviews, available in Kaggle.

On the path of achieving this I will be using Julia for handling strings; more specifically, I intend to show how to:

Reading in text as a String

I will be using the CSV and DataFrames packages to read in the Musical_instruments_reviews.csv file as a DataFrame that contains the Amazon Musical Instruments Reviews.

If you navigate through the instruments DataFrame, you will see that the reviewText column contains the review texts. Each member of the String reviewText column vector is a text. The join() function joins these texts into a single big String that we can further manipulate.

The second step is to do some cleaning on the textual data by deleting the punctuation marks and then tokenizing the cleaner output. The following line does the two processing tasks in one step. replace() takes in the reviewed texts and replaces four punctuation marks expressed by the regular expression pattern r"(;|,|\.|!)" with the null string. In other words, it deletes them.
The cleaned text is further tokenized with split using as a splitting criterion the space character " ".

The most well-known related counting method in Julia is based on the StatsBase.countmap() function that outputs a Dictionary with words and their frequencies. The first step is to call StasBase's functionality in the current namespace and then we may use its exported function countmap() without needing the package qualification; meaning that we don't need to use the package_name.method() notation, as in StatsBase.countmap(). What countmap() does is that it takes a vector of any type of values and returns a dictionary with keys being the vector elements (the words in our case) and values being the occurrence frequency of these words; namely the elements of the initial vector reviewtext_tokens. Below, word_dict is a dictionary with keys being the vector elements of its argument, reviewtext_tokens and values on the right of the right-pointing arrow are their occurrence frequencies.

Recall that according to Zipf's Law, a few words are very common in a text or corpus of texts and the rest, very rarely, occur. To be able to visualize this asymmetry on the word frequency distribution, we need to first sort the words based on their frequency in decreasing order. Sorting a dictionary based on its values is easy in Julia. The sort() function allows you to use an anonymous function, x->x[2], defined within the named argument by so that you can focus on the values of the Dictionaries' pairs. Notice that for sorting in decreasing order you need to set the rev argument to true.

The values of sorted_word_dict, on the other hand, has the key-value pairs of the initial dictionary word_dict, as you can see:

To be able to access the keys you need to access the first member of the pairs of the initial unsorted dicitionary that is stored within sorted_word_dict by using getindex(value, 1).

One of the most well-known Julia plotting packages is GadFly. Being a fan of R and its powerful ggplot package, navigating through GadFly's was a breeze.¹ Here is how you could barplot the sorted frequencies of the 40 most frequent words keeping the words as labels on the x-axis and using the dodge position. 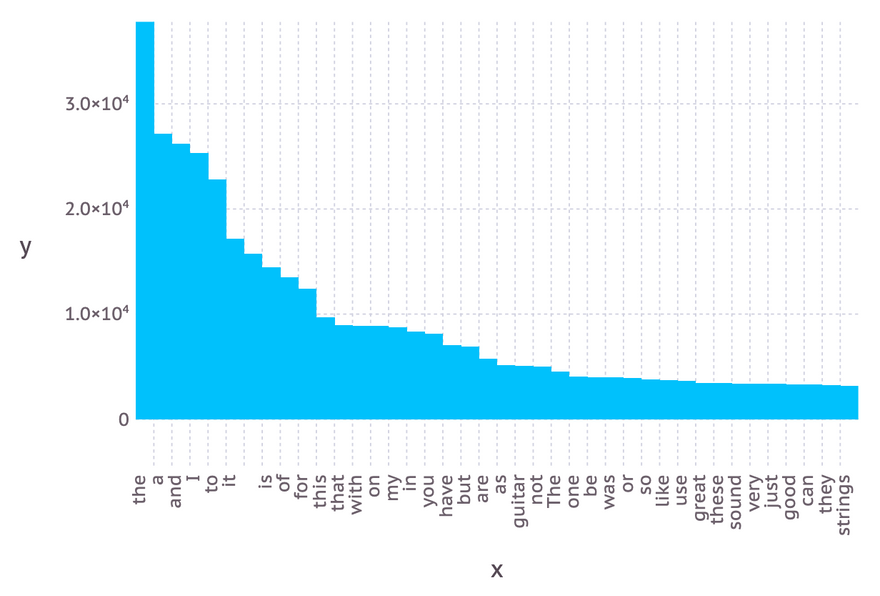 As you can see, the shape of the distribution proves empirically the truth of Zipf's Law.

[1]: Roland Schaetzle wrote an excellent post on TDS that is highly recommended by the Julia community for those who migrate from R to Julia and want to have a similar plotting experience to ggplot.

Alex Tantos
Computational linguist with a genuine love for formal semantics. Have been moving back and forth between Julia, Python and R, constantly being surprised by the joy I get while learning Julia.

Once suspended, atantos will not be able to comment or publish posts until their suspension is removed.

Once unsuspended, atantos will be able to comment and publish posts again.

Once unpublished, all posts by atantos will become hidden and only accessible to themselves.

If atantos is not suspended, they can still re-publish their posts from their dashboard.

Once unpublished, this post will become invisible to the public and only accessible to Alex Tantos.

Thanks for keeping Julia Community 🟣 safe. Here is what you can do to flag atantos:

Unflagging atantos will restore default visibility to their posts.